The morning started off just like any other tournament morning. The alarm clock rang just before 4 AM. I get my clothes and foul weather gear together, pack up the rods, tackle, downrigger, food and drinks. A quick pitstop to the gas station to top off fuel, then I dropped the boat in the water. I ran to a friends house where I keep my bait pen’s stashed for tournament day. I was really excited for the bait we had because I had spent days prior running all around making sure I had big, cream of the crop baits. I really take pride in the bait I bring with me knowing that it makes all the difference when tournament fishing. Simply put, having the best bait gives you the best chance to catch the right fish.

Pulling up to the dock I noticed there were a few baits floating, as is usually the case when putting a lot of bait in the pen for days, but then I got a better look and realized the worst had happened. Someone had stolen the best of the forty plus baits I had in the pen. It went from forty 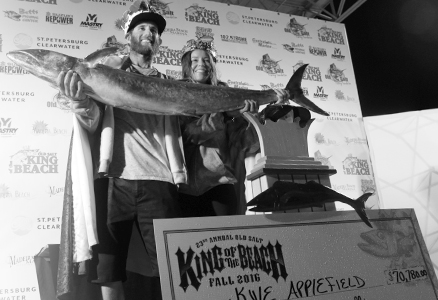 of the best looking baits down to about ten of the worst looking baits I’ve ever seen. All that remained where the bruised battered and scarred. Two full days, morning till night, looking for the perfect kingfish candies. All the gas used, the time and effort put in, was all for nothing. Now it was just after 5:30 am, time to pick up the wife and break the bad news that the first part of the morning would be spent finding bait.

I let my wife Jenny sleep in on tournament day so that she is fully rested because she fights every fish. As I greet her at the dock she can see by my demeanor that something is wrong, and so I let her know we were robbed. We knew we had to suck it up and get started looking for bait. After about 45 minutes of bait fishing, we luckily where able to scrounge up what I estimated was just enough bait to fish for a few hours. I would usually leave with much more bait but we needed to get out for the early bite.

Making our run to the first spot we were a little behind schedule but still able to get there and get a good bite in the first ten minutes of fishing. A great feeling that was short lived as before I could turn the boat to chase, the fish it was gone.  I knew it was a good fish and was eager to get another bait hooked so Jenny could get it back to the danger zone behind the boat. The vary next bait gets skied by what I knew was a BIG fish. Not once, not twice, but three times flying out of the water in hot pursuit of the lively fresh bait. Finally on the third try at least one hook sunk into the fish and it began dumping the reel. One more time, before we could get in pursuit of the fish, the hooks pull and we are right back where we started.

Knowing we had two good bites and seeing the size of the second fish, I felt sick to my stomach knowing we blew two good shots at big kingfish. For the next two and a half hours we slowly pulled baits around the area and replayed the recent events over and over in our heads hoping for another chance. The entire time I was changing baits out as they got sluggish swimming behind the boat with hooks in them. At around 10:20am I freshened all the baits with the last of the good looking baits we had left, knowing we would have to leave soon to get more. As I reach in the cooler to grab a snack I hear a funny click from the reel. I look back and see a hole in the water not more than 15 feet behind the motor and the closest rod starts to bend. It was strange the way the fish didn’t take off screaming right away but seeing the splash on the bite I knew in my mind that it was the right fish. Jenny jumped into action by grabbing the rod and began to stay tight with the fish and it made a slow circle. The fish swam around behind the boat swimming like it wasn’t even hooked. That lasted about 30 seconds and then it took off just past the motor and began dumping line towards the bow, reminding us how a big kingfish is supposed to run. I pointed the bow at the fish and cleared the other lines as Jenny made her way to the bow. After a violent run the fish then slowed and I got right over the top of it with gaff in hand. Jenny does a great job on the rod and reel, she had the fish close to the surface in a short time and I got the gaff in it. When I pulled the fish over the rail I knew we had a good one. I immediately picked up my wife and told her we just stuck a 40 pounder in King of the Beach!

As I packed the fish into the bag I was guessing the exact weight at just over 40. We fished the few beat up baits we had left for a few minutes, then after discussing what we should do we both came to the conclusion we had the biggest fish that would come from the area we were fishing. We decided to head on home with our fish and relax before the weigh in. I knew we were in the money, but was not expecting it to win especially with the size of fish that had recently been winning tournaments.

Arriving at the weigh in line with a good sized fish is definitely nerve racking. It’s a good feeling but at the same time you can never be sure. Fishing a single engine boat in all the tournaments gives you another decision to make. Weighing your fish in the wrong division can cost tens of thousands of dollars in a big tournament like this. After waiting in line for a while hearing rumors of other nice catches we somehow ended up wiggling our way to the end of the line. With the seriousness setting in that we could possibly win 70,000 dollars it started feeling like a movie or a dream. When the fish hit the scales and the weight was over 44 pounds, that put us in first place as the last fish weighed. Fourteen years fishing this tournament religiously, I couldn’t believe that my wife and I pulled off the unthinkable! With all the fishing talent that shows up for these

tournaments, I feel blessed to have been in the right place at the right time. Putting together the right game plan, and overcoming all the obstacles that were thrown in front of us. It took just a little know how and a lot of luck.  Adding to the addition to the win is how it will be helping my wife and I start our lives.

I am a full time charter and commercial fishing captain and my wife is a fashion stylist. Neither of us make a whole lot of money but we do what we are passionate about. This gives us an opportunity to grow our businesses and help us start a family better our lives. We are very grateful for everything this tournament win has brought us and are excited we get to wear the crown. A huge thanks to Old Salt Fishing Foundation for putting on a great event! I will always fish King Of The Beach.