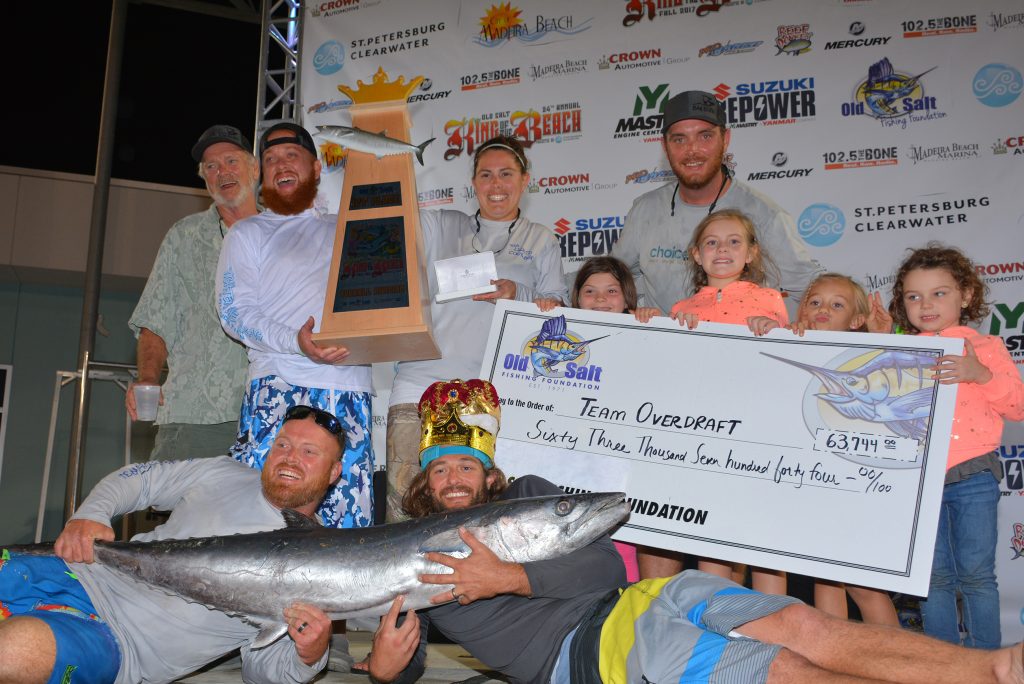 The 24th annual fall King of the Beach King Mackerel Tournament and Festival was held in Madeira Beach with beautiful summerlike weather.  This fall we had 543 teams registered and eager to take their chance at wearing the crown.  It started at the Captain’s Party as all the teams watched the TWT’s grow to record numbers for payouts. Little did they know the twist it would take.

Fishing was a bit slow overall, the wind kept everyone on their toes but the sun was shining bright.  The teams were locked, loaded and ready to roll at the 6am start time.  The weigh in started at 4pm and in order to qualify to weigh you had to be in line by 5pm.  The boats rolled back in and teams lined the field with their fishbags in hand looking for what place they would take.

As we weighed the fish, one team weighed early and managed to stay at the top all day, Team Overdraft.  They weighed their 46.99 lb Kingfish with great joy.  This team is made up of family with Joe Bodner captaining the crew.  Our new King took home $63,744 for his first place win.

So, what is the twist?  Our record TWT’s did not follow the top 3 teams as is usual. Both first and second place teams in the Overall only played in the regular TWT, not the High Roller.  The High Roller TWT shifted down to 3rd, 4th & 5th places making record payouts for these places.

A Real KING Angler: Team Fishhawk Charters had a very unexpected day.  Capt. Vargas started the day with his entire team bailing on him. So, he went solo (well, with a camera guy in tow).  Capt. Vargas managed to drive the boat, hook the fish, catch it, gaff it and weigh it!  And it paid off BIG. His 3rd place win in the Overall netted him $29,796.

The weigh-in took about 4 hours and we weighed in 202 fish total.  Old Salt paid out 35 places in Overall Division, 5 in Single Engine Division, 3 in Traveling Angler, 3 in Ladies, 3 in Youth, 1 Greenhorn and 10 in Spanish Mackerel which totals to 60 paid places.  (1 out of every 3.4 fish weighed-won a prize)  And, Old Salt also gives every kid that comes to weigh a rod/reel combo and soft tackle bag.

Friday night we had an awesome band, Tim Montana and the Shrednecks come play for us.  They were awesome.  Tim happens to like Reef Donkey beer, which just happens to be the “Official Beer of the King of the Beach”.  He was able to go fishing Saturday and learn what a REAL reef donkey was … check out the photo of him 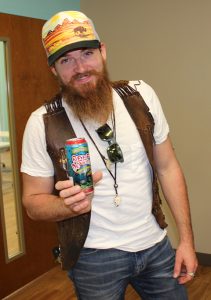 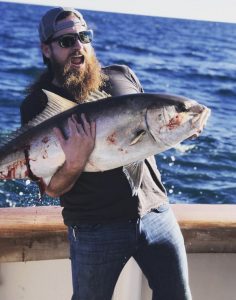 holding a nice Amberjack.  Thanks to Captain Pat Young and Crown Auto for this awesome hook up.

We want to  THANK everyone that makes this event so special:  our fishing teams, board of directors & core committee members, over 100 volunteers, sponsors and vendors.  We also want to mention our beautiful city of Madeira Beach, their staff and support makes this event a true gem.

3 Responses to Another King is Crowned ….Fall 2017 King of the Beach