Strolling past the case at a favorite fish monger I spied a small carton of Yellowfin Tuna nuggets (the pieces that were leftover after the juicy steaks and loins were cut) being offered at $6/lb. Grabbed the entire carton. Smaller pieces like these do not sear up as nice as their larger counterparts (no cool raw centers here) but, with a little care, and a tasty dipping sauce, they make for a wonderful and easy to prepare appetizer or accompaniment to the main dish.

Red Hot Chilies (I used Thai Hot): 1-4 as you prefer. Cut or chop the chilies into very small pieces. You may substitute a chile sauce if you don’t have the real thing….. 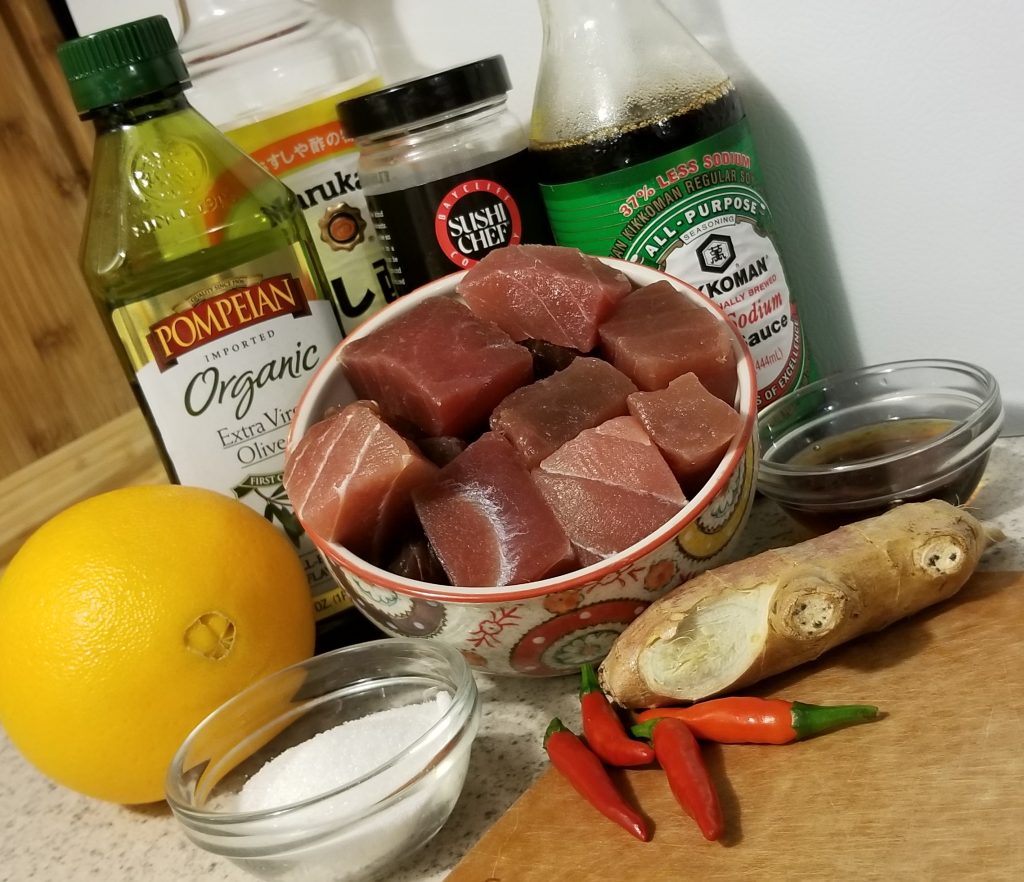 Let’s start with a shot of most of the ingredients to get oriented.

Next (no pics of this… sorry) let’s take a look at the dipping sauce. Start by heating the sugar in a non stick pan, stirring as it heats until the sugar begins to toast up and liquefy. Remove from the heat and introduce (whisking) the soy sauce. When the soy and sugar are combined return the pan to the heat and whisk in the remaining ingredients except the orange zest. Remove from the heat to cool. Add zest when the sauce has cooled sufficiently.

Swirl olive oil in a large bowl then add generous sprinkle of your seasonings. Add the yellowfin tuna nuggets to the bowl then swirl, move and mix it around until all the pieces are coated with the seasoned oil.

On the stove top, bring an iron skillet up to medium heat. Add grapeseed oil. when the oil has reached temperature, add the tuna nuggets, one at a time until all are in the skillet. As soon as the last nugget is placed, and beginning with the first nugget you placed, start turning the pieces. Continue the process until each piece has been seared on all sides. Remove as soon as the last side is seared. The goal is to sear each side for 15-20 seconds. You’ll need to be moving at a brisk pace.

Plate the tuna and dipping sauce up in a festive manner and you are ready to go. Try this dish out the next time you are called on to cough up a party appetizer. The nuggets, dredged in the dipping sauce go down easy and you’ll be left with only an empty plate to take home.

This recipe is just one of three holiday appetizer dishes Old salt has created for you this season. Check out our Minorcan Clam Chowder and our Crab Stuffed Mushrooms as well.