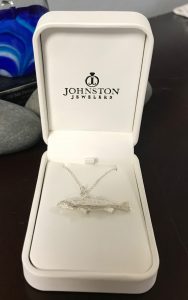 This week is TROUT!  We are super excited to have a special prize for you this week.  It is a beautiful silver trout necklace.  It was donated by Johnston Jewelers, a long time friend, member and supporter of Old Salts.

So… send us your pics and WIN BIG.

Remember it can be any kind of trout …. sea trout, rainbow trout, brown trout, etc.

HOW TO CATCH RAINBOW TROUT

It is the fly fishermen’s delight as it takes a fly readily, leaps often, and fights hard. The following are fishing methods used to catch this fish: Fly Fishing & Bait Casting

The following are lures, tackle or bait that can be used to catch this fish: Flys, Jigs, Insects & Cured Fish Roe

WHERE TO CATCH RAINBOW TROUT

It has been extensively introduced across the lower Canadian provinces and throughout the area of the Great Lakes to the Atlantic coast, south in the Appalachians to northern Georgia and Alabama, east in the southern U.S. to western Texas and sporadically in the central U.S. as well as above the Great Lakes on the Atlantic coast. It has been transplanted to New Zealand, Australia, South America, Africa, Japan, southern Asia, Europe and Hawaii.