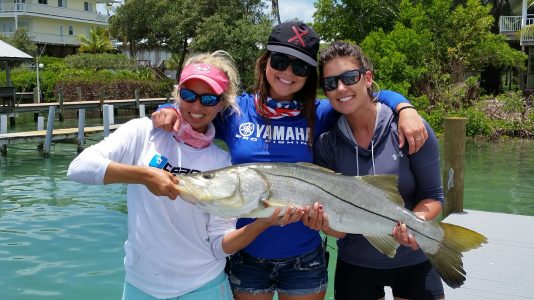 Inshore: The Snook bite is hot right now and should be on fire as the water temps get into the upper seventies and low eighties. These fish are in there pre-spawn pattern and will be moving from the inshore waters, through the passes and onto our beaches in numbers we haven’t seen in years. There are several ways to target these fish this time of year. My favorite way is by using artificial baits like Mirr-O-Lure’s Mirr-O-dine in pilchard colored patterns such as the 17MR 18, 50, 52 and TT. Other similar style suspending twitch baits will also work well, but the most important thing is matching the size of your lure to actively imitate the size of the bait in the area.

Areas you will want to target are any shoals, oyster bars, mangrove islands, and deeper flats that have plenty of bait and life around them. Any of these areas that are located near a pass with some good flowing water should be holding the bait as well as snook, redfish, trout, ladyfish, jacks and even the occasional tarpon; none of which are a bad bye catch! Use light tackle, 3000 size spinning reels loaded up with 10 or 15 pound braid and a 5-6 foot piece 25# fluorocarbon leader will get you lots of bites and the lighter tackle makes every fish that much more fun and rewarding. Later in the spring around the middle of May most of the larger snook will have made their way onto our beaches. Many of us have seen these fish in small pods but can never get them to eat. I believe this is largely influenced by the amount of beach goers that have the fish on edge. A way to avoid this is to fish the early morning hours from about midnight until about 7 a.m. Artificial baits work well and ones mentioned earlier will produce fish. However, this is the time of year to target a true trophy fish on the beach. Late nights spent camping on Shell Island as a kid produced a lot of big fish in my younger days. Alot has changed about Shell Island over the years, but the snook still show up in good numbers on the beach side of the island. Large baits such as ladyfish, mullet, and grass grunts seem to get the attention of the larger fish. I prefer 4000 to 5000 size spinners with 30lb braid and a 50lb fluorocarbon leader with a 5/0 circle hook (free lined). 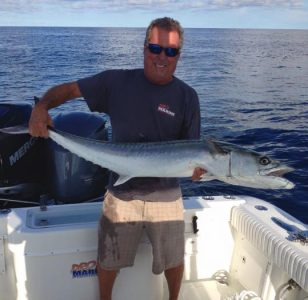 Offshore: Kingfish and Spanish mackerel have invaded our waters again and with such a mild winter I think this year will be one to remember. The bait that was here in the fall never got pushed to the south and has been here all winter long. This means we are in for an epic amount of bait which in turn should bring a huge number of pelagic species into our area. Artificial reefs and the shipping channel are always good areas to start looking for bait and the fish that eat them. If you’re looking for kingfish or Spanish slow troll live baits around bait schools while using a stinger rig on light tackle. Two mistakes I commonly see while trolling live baits are. 1) Trolling to fast. The baits need to look natural, a spinning or skipping bait will leave a lot of fish passing up on your presentation. You just want to “take them for a walk”. 2) The length of your stinger. The stinger or trailing treble hook is there to hopefully catch a fish that has short struck the bait. The stinger hook should be ¾ of the way back on the bait fish and be left free swinging beside the bait. Don’t pin the hook in the bait this will make the bait look unnatural.

If you are planning on fishing the King of the Beach in April make sure your on your “A GAME” and don’t make any mistakes.

If you’re looking for something a little different try fishing these same areas early in the morning for blackfin tuna. Baits and tactics stay the same but your rig is a little different. Instead of using wire leader try using a 40 to 50lb fluorocarbon leader with a 4/0 circle hook. This will drastically increase any chances for tuna and surprisingly with a circle hook placed in the corner of a toothy jaw you won’t get cut off as much as you would think.

Thanks again for all your support and for those of you who participated in our “Great American Grunt Hunt” we all hope you had a great time and enjoyed yourself. If you have any boating or fishing questions feel free to call us anytime at your local Marina (727) 399-2631 or visit our website at madbeachmarina.com.