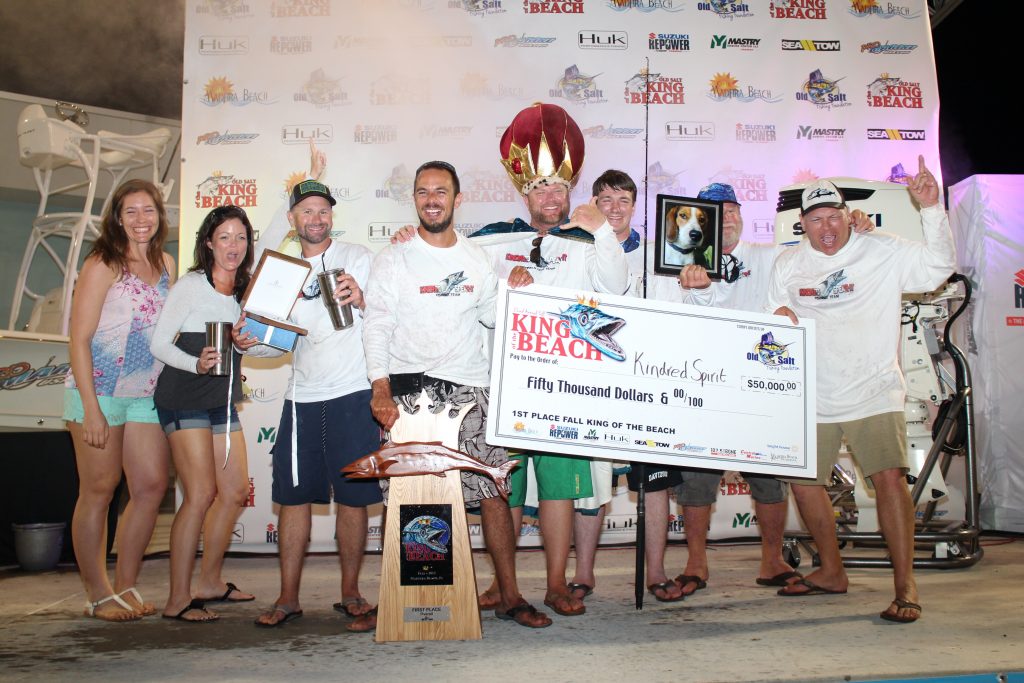 As I sit here 4+ months after winning the largest tournament on the West Coast I’m still in awe. My father and I have been fishing King of the Beach since its inception. Although we have always done well in the event we’d never managed to pull off the difficult task of winning the whole thing!

This year we partnered with Tim Brundage, David Raciti, Anthony Albert and Tim Garside on Tim Brundage’s 35′ Contender the “Kindred Spear-It”. We worked hard to catch the right bait which started on Wednesday, we knew with $50,000 up for grabs the bait would become more difficult as the week went on. On Friday morning Tim and Dave set out to top us off with fresh bait but had limited success, finally in the afternoon we were able to get what needed and were even able to help a friend with their bait situation!

Saturday morning we met at 4:30 and quickly loaded our gear and baits and were on our way to the first spot of the day. All morning long we were plagued with sharks but saw a few decent kingfish caught around us. Just as any tournament goes, you start to hear “radio fish” where someone has a big fish or the bite is on somewhere else but we stuck with our game plan and didn’t chase after caught fish. Shortly after lunch time we decided to roll the dice and catch fresh bait, this proved to be huge! As soon as we pulled back in to our original spot with fresh baits we immediately caught a fish in high 30’s, a great fish but not one we were looking for so we reset our spread.

A few minutes later our ticket got punched as our 42.27 lb fish left a gaping hole on the surface where our bait used to be! Dave picked up the rod and had the fish boat side in less than 3 minutes, my father took the wheel from me and I assumed the gaffing duties. Even though the fish was “green” and a little deep I took the shot with the gaff and luckily hit the fish dead in the shoulder!!!

Once we had the fish onboard we all broke out with screams and high fives. With nearly 600 boats fishing we didn’t know how well this fish would fare but we decided to fish till 3 pm before making our way up the beach and to the scales! Even after we weighed in we couldn’t relax as we saw several really nice fish in line throughout the course of the evening. I don’t think there was a single member of our team that didn’t walk up and down the weigh in line a dozen times to see what other people had! Once the last fish hit the scale and they announced it was over it was like the weight of the world was removed from our shoulders and we could finally relax and enjoy the moment! O

ne of the coolest things I’ve ever gotten to do in my life was to take the crown and place it on my fathers head on the stage. It was truly a great moment and something I’ll never forget! Thank you to all of the volunteers and sponsors who helped put on such a fantastic event and made that moment possible for my team and I!

← A Great Day Of Fishing – 2 Ways
Want To Win That Fishing Tournament? Use Bulk Fluorocarbon →