Known as “soapfish” to some old crackers, Snook are one of Florida’s premier inshore gamefish and are
making a comeback in our region from the harsh winters of 2009-2010. Many moons ago, originating in
the everglades area, locals referred to the Snook as having poor table fair value. These days, they are
the undoubtedly labeled as the best tasting inshore fish. Most anglers remove the skin from their catch
when harvesting a majority of Saltwater species. However, back in the day, this wasn’t necessarily the 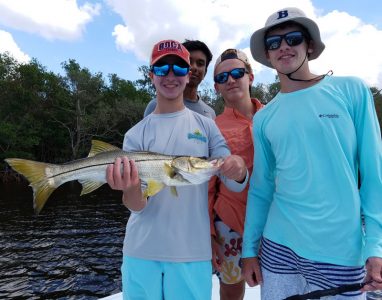 case. It wasn’t until folks starting removing the skin off the filets that they became the “crem de la
crem”. Snook were given the tag name of “soapfish” until this point because when prepared with the
skin on, the meat was given a “soapy” taste and not favored by most. Stories of Mullet fisherman leaving
hundreds of pounds of Snook on the beach to rot are not uncommon. Back then, they were considered
to be “net nazi’s” and horrible to eat. Today, they are one of the most researched, conserved, and
protected species in Florida and certainly one of the staples of our fishery.

The Tampa Bay area boasts a fantastic Snook fishery. The deep channels and passes provide excellent
spawning grounds during the summer months and the various rivers and creeks feeding the estuary
enable large populations to seek warmer water in the winter. The bigger rivers, like the Hillsborough,
Alafia, Little Manatee, and Manatee also provide a safe haven for juveniles through their adolescence.
Snook are extremely resilient to salinity levels and generally speaking water quality. However, they have
zero tolerance to water temperature. Scientists believe the magic number is around 55 DegF, meaning
anything below that temperature and they are likely to die or at least be greatly affected. With the
exception of 2009-2010 we generally don’t see water temps that low in our region very often, which is
why our population thrives. The further north you go, the less the population.

Snook season opened Sept. 1 and will remain open in our area until Dec. 15. The slot limit is 28”-33”
with the tail pinched and the bag limit is 1 per person per day. However, most Floridians are still
preaching catch and release on these unique fish.

Live bait will be the bait of choice across the board for Snook fishing. For me a large pilchard (green
back) or pinfish is my “go to”. I prefer free-lining over a tradition popping cork and I like tail hooking my
baits. The typical rig is 24-30” of 30lb Ohero fluorocarbon leader paired with a 3/O-4/O Mustad demon
circle hook. Any line-to- line knot will get the job done and a simple clinch, loop, or snell knot at the
terminal end is sufficient. Having plenty of live bait for chum will increase your catch quantities but not
always a requirement for fishing for bigger fish. They don’t tend to be as reactive to the chum as the
smaller fish. If a larger fish is hooked, be prepared for a battle. It generally doesn’t last too long but the
first couple runs will most likely determine the outcome of the fight. If you are fishing near cover, expect
the fish to immediately head for it. By applying stern pressure against the fish, it is imperative to gently
work the fish around the obstacles. If you happen to get pulled into the mangroves, placing your rod tip
in the water and keeping the line below the cover will increase your chances of landing the fish. “High
Sticking” will most definitely get you cut off and is something I preach on a daily basis. Once the fish is
landed, take extra precaution is keeping the fish healthy. If the fish is not being harvested and taken out
of the water for photos, always keep it horizontal and avoid sticking your hands in their gills. Make sure
to give the fish plenty of time to recuperate boat side before the release.

As we approach the colder months look for concentrations of fish to work north towards our river
systems and focus on main points and tidal flow areas for larger populations of fish. Snook will generally feed pretty heavily through October in preparation for their winter “hibernation” and recovery from the
summer spawn.

Stay dialed-in to what’s biting in Tampa Bay! Capt. Travis Yaeckel, Capt. Jason Prieto, Capt. Ric Liles, & Danny Guarino bring you the full report each week. Listen every Sunday Morning 8-9am on 1040AM ESPN Sports Talk Radio. Watch LIVE on Facebook and YouTube every Wednesday 6-7pm. Or download the podomatic app on your phone or tablet and listen anytime. Search “ Tampa Fishing Outfitters Radio Show “ to follow us and find current and past shows.