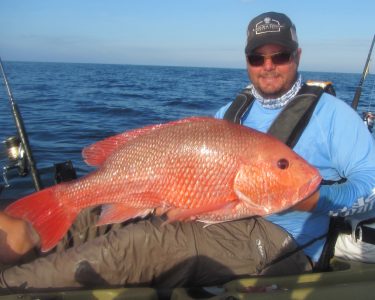 NOAA announced Tuesday the red snapper season for private anglers will run from June 1, 2017, 12:01 am local time to June 4, 2017 at 12:01 am local time. So as a private boater, unless you go fishing for red snapper the first weekend of June, you’re out of luck if you want to do so in federal waters, which start 9 nautical miles offshore.

According to NOAA, here’s how the season lengths were determined:

–The red snapper total recreational quota is allocated 57.7% to the private angling component and 42.3% to the for-hire component.

–In 2016, the total recreational quota was exceeded by 129,906 pounds. The private angling quota was also exceeded.

–Catches in both state and federal waters are counted against the quota. The number of days for each component to harvest its annual catch target was calculated using 2016 catch rates and accounting for the expected red snapper harvest during state seasons outside the federal season. Private anglers are expected to harvest nearly 81% of the private angling quota during state seasons that range from 67 to 365 days.

–Based on the 2017 catch targets and after accounting for landings during state seasons, the private angling season in federal waters can be 3 days and the for-hire season can be 49 days.

–For information on red snapper recreational management in the Gulf of Mexico including how the season lengths were projected, go to: http://sero.nmfs.noaa.gov/sustainable_fisheries/gulf_fisheries/red_snapper/index.html

The red snapper season for Florida state waters (less than 9 nautical miles from shore) are:

–Saturdays and Sundays in May starting the first Saturday in May.

–Open Fridays, Saturdays and Sundays in September and October, plus Labor Day (Sept. 4).

(information taken from this site: http://www.wjhg.com/content/news/Federal-snapper-season-announced-3-days-for-private-anglers-in-2017-421048453.html)