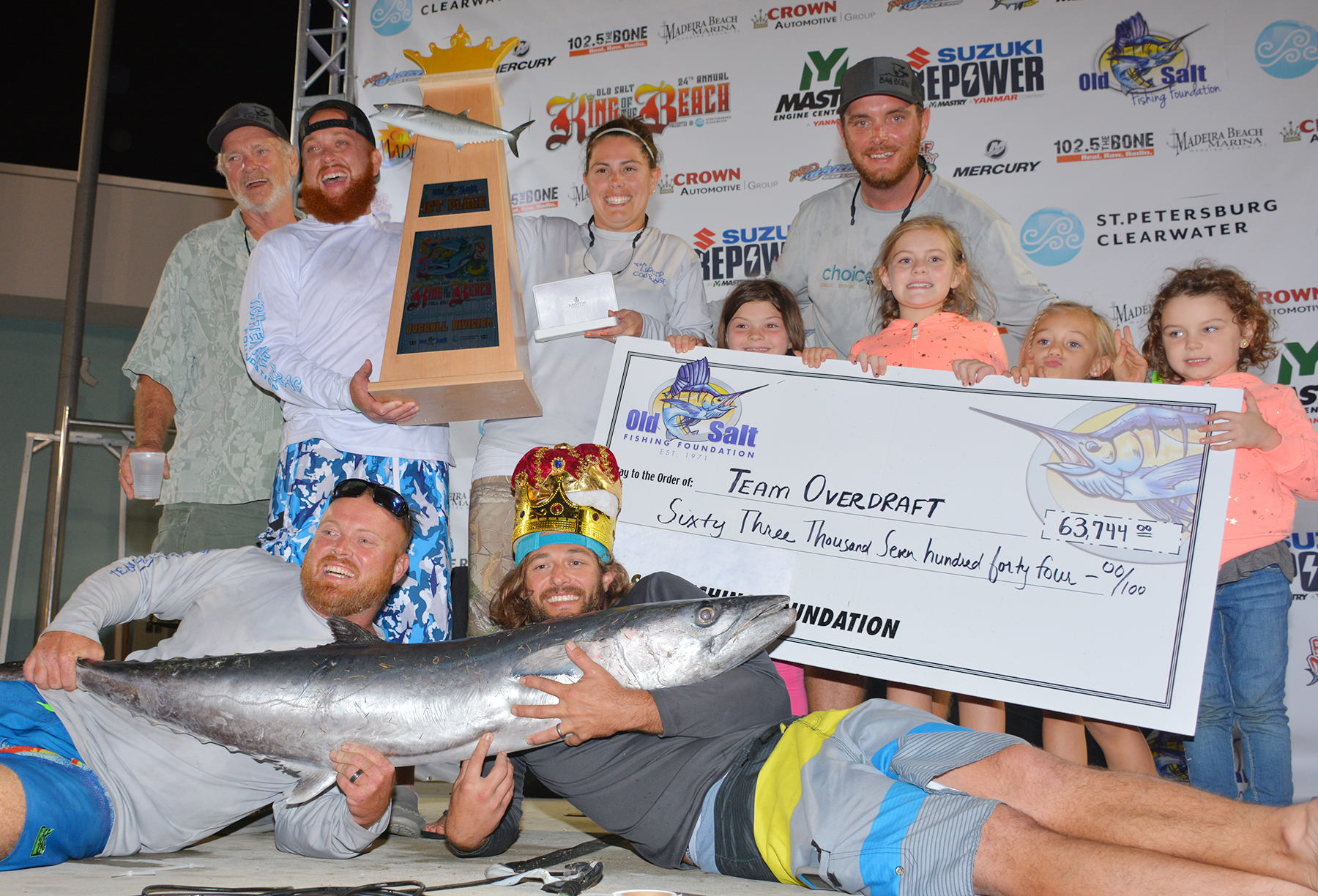 The one event during every Spring and Fall kingfish tournament season that everyone(and their momma) looks forward to! It’s the tournament of all tournaments! Every tournament captain on the west coast of Florida, and many more throughout the southeast dream of being crowned the King of the Beach! I’ve had that dream since the late 90’s when I was just a kid fishing this event for the first time with my dad and brothers. We spent many many years busting our butts and coming up short. From catching small fish, losing big fish, catching no fish at all, spending majority of a tournament day searching for bait, the list goes on. With every mishap we encountered, we learned from it and got better. We started to consistently catch bigger fish, placing us higher and higher on the leaderboard in numerous events on the west coast, but still not the big win.

In the 2016 Fall King of the Beach kingfish tournament my good friend and neighbor Robert Leon let us borrow his boat to fish as I was in search for new power for my boat. We were excited that we had the option to fish the single engine division and it ended up paying off big time. We spent all day the Friday before searching for the best baits! On the way to the dock after a long day of bait fishing, we find all but two of our baits dead! After investigating the cause we determined we had gone through some red tide. We were all worn out already and looking forward to the much needed rest that was no longer an option. We decided to head home and get showered and load the rest of our gear, and head back out to find more bait. We spent all night throwing the net to get more quality bait. At 5am we decided we had enough to fish with and headed to our spot. The weather was horrible that day with 20kt winds out of the NE and we had been on a good bite on the beach before the event and we had it all to ourselves! As soon as the sun peeked over the horizon we were on fish. All morning was nonstop action! A lot of low to mid twenty pound fish were landed, but we had seen numerous bigger fish sky so we knew it was a matter of time before we upgraded. At 10:30 I was on the phone with my wife giving her an update on the morning when our biggest bait we had left, and one of the survivors from the red tide and still frisky as can be, gets blown up on the long line! The reel is screaming, my brother is screaming that it’s the bigger bait, not sure where the phone went, but we all went to work clearing lines and turning toward the fish and the line goes slack! My brother thought the fish got off….. and now I’m screaming REEL! REEL! REEL! The fish turned right back at the boat! He gained line quickly and got tight on the fish again, bringing it right in front of the bow for an easy gaff shot. Then we were all screaming and giving high fives. Back at the weigh in we thought we had a respectable fish, but would’ve never imagined it would come down to us and the last single engine team to weigh right behind us! We got a peek at their fish and new it would be close. Our fish hits the scale at 32.19 lbs! Their fish hit 32 when they first hung it and my heart dropped! It settled at 31.45 lbs! Screaming and cheering began! What a day for Team All Kinked Up! I then remember watching Kyle Applefield take the win in the overall division with their stud 44 lb. fish and get crowned king! I quickly remembered how bad I wanted that crown.

Now on to 2017. After getting new power we were back on my boat and with that, we decided to change team name to Slab Happy. We had another productive day in the spring KOTB finishing 12th in the overall division and 2nd place ladies. The team name wasn’t sitting right so before the fall event we changed the name again to Team OverDraft, because we love spending a lot of money on fishing tournaments! The day of the captains meeting we spent all day loading the live wells with bait. On Friday we decided to make a big run to the south where we had heard some bigger fish had been caught. The area looked really good for what we were looking for, so we decide to head back in and get more bait. It was a bumpy ride back with a solid 3-4ft sea, and we were in a bit of a hurry to get back and freshen up the livewells. Once back at the dock I noticed a major structural issue on the transom that would definitely limit us from making another big run, so we have a team meeting and we all decide to fish an area offshore of St. Pete. We planned on leaving extra early so we can take our time getting out to our spot. We arrived just before 6 am and immediately start chumming. Lines go in at 6:01 and the first bait out gets destroyed! By a shark. A big shark. It was still dark out and I remember seeing the silhouette of the dorsal fin in the moon light. I told the crew we were gonna need a bigger boat! After our encounter with JAWS we didn’t get another bite until the sun was up. 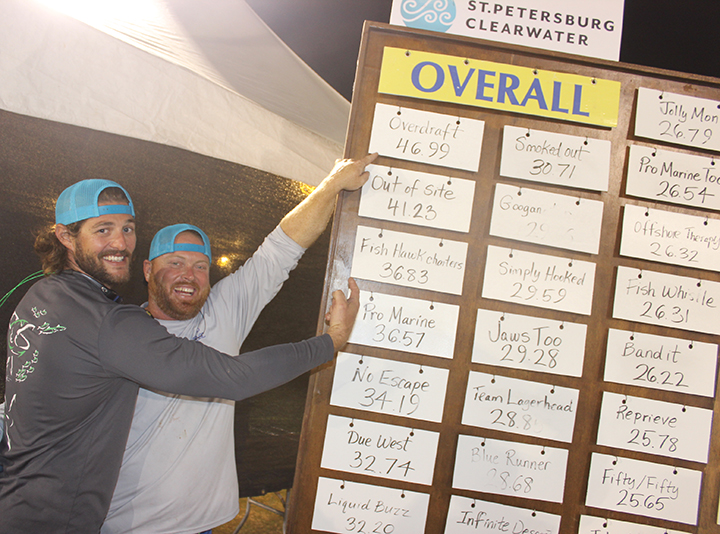 Our next bite was a small king that ate a bait that was as big as it was. There was a handful of other boats working the same area and we had seen them land a few small fish as well. It’s now pushing 9 am and I’m getting antsy. We had only seen small fish, so I start working away from the handful of boats towards another nearby spot that we’ve caught nice fish off of before. I told my brother Jeremy to take the wheel so I could use the men’s room, and decided to check the downrigger baits. We’re always checking baits, keeping everything fresh and lively. I changed out the port side downrigger bait with a fresh blue runner, and as I’m working the starboard side downrigger bait, the moment I will never forget unfolds. Port side downrigger bait gets hit and the Accurate reel is screaming like I’ve never heard before. Our lady angler Melissa Bodner grabs the rod as we’re clearing other lines. As we turn on the fish Melissa is starting to scream we gotta go! I’ve never seen a fish dump a reel as fast as this one did. As she gains line back and the fish finally comes into view, teammate Eddie Diaz says “oh my god that’s a huge kingfish!” The fish is now directly under the boat and my brother Justin misses the first gaff shot and the fish is gone again. You could cut the tension with a knife at that moment. Melissa stays calm and works the fish back to the boat again. The fish pops to the surface circling away from the boat and this time Justin uses every inch of the 12’ gaff and makes a beautiful stick! I thought he was going overboard because he lost his footing and I had to help him pull the fish in the boat. We all went nuts after seeing how big it was laying on the deck. I’m sure the handful of boats a half a mile away heard us carrying on. With the issues we had with the boat and the size of the fish in the box, we decided to take our chances and head in. We were one of the first teams to weigh in and the fish settled on the scale at 46.99lbs! Now the waiting game. The anxiety and excitement grew bigger and bigger as the weigh in went on, and is one hell of a feeling and experience to be in that spot. Once the last fish was weighed and we were announced the kings it seemed so surreal and was almost like the dreams I’d had before only way better! It is a moment that we will have with us forever, and one that we will continue to bust our butts to be in again! I’d like to thank Old Salts for busting their butts to put on such an amazing event. I can only imagine the hours and effort it takes to put on these events and our hats go off to everyone who has a part in making them run so smoothly. Thank you! I LOVE KINGFISHING!

← Old Salt Photo of the Week: SPANISH MACKEREL
The Bay Is Busy! →

5 Responses to Winning King of the Beach – Team Overdraft

Mad Beach Trash Round Up