This piece on how to catch a smoker king was written by our dearly departed friend Jon West for Local Angler Magazine in October of 2006. Jon knew the area and his Kingfish! Read and learn.

Landmarks. Ancient Dilly Holes. Conditional hot zones. Parking lots.
They are the collection of local historical “smoker” spots and they are all that and more. Some are close to shore, even inside Tampa Bay, while others sit far out in the Gulf. These are places where big kingfish swim, small fortunes have been won and many an angling prayer has been answered.

Local Angler editor Jon West has been competing in local king tournaments since the first, seven-day marathon event held out of Gators back in 1991. He’s always been a bit reluctant to“give it all up” but as he and other successful tournament teams will tell you, all the free information in the world doesn’t get up at 1 a.m. to catch bait or run 120 miles in six footers. If you were to survey the money board at every tournament over the last 15 years, the following locales would dominate the board.

The Egmont Channel
The Egmont Channel, stretching from the Port of Tampa inside Tampa Bay, all the way out to the Whistler Buoy, is a 20-plus mile artificial reef. The sheer walls of the channel, coupled with the FAD-like chains that secure its marker buoys, are a never-ending bait magnet. And where there is bait, there is kingfish.

More tournament-winning fish have been caught adjacent to the channel than anywhere else in local waters. From the Jaybird’s 51.1 -pounder back in 1995 (the biggest king ever caught in a local SKA tournament) to La Perla’s 44.6 pounder several Springs ago, the channel can produce a big-money monster at anytime.

Where to fish in the channel is largely dependent on current conditions and personal preference. When there’s 10 acres of Spanish sardines between channel markers five and six and the Whistler, it’s hard to fish the 90 foot hole at the mouth of the bay. At the same time, when there’s tons of glass minnows getting worked hard by ladyfish and mackerel between Egmont Key 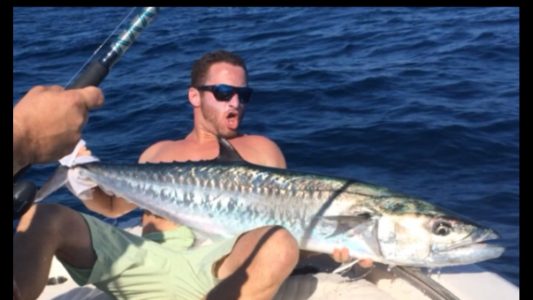 and Port Manatee, you have to wonder how many big kingfish are swimming under the Skyway Bridge. The rule here is to be up to date on the bait situation and fish it accordingly.

The Peaks
This is an interesting area southwest of Pass-A-Grille aptly named for it’s steep drop-offs. Twenty-foot roll-offs are common out here and the bait can get soupy around the structure. This one of those areas that can be fishless one day and turn on overnight and hold big fish for many days. A good area to fish when it gets a little rough.

Beach Hard Bottom Areas
Between Boca Grande Pass and Anclote Key are countless patches of live bottom in 12 to 25 feet of water. Some of the areas are full of small ledges and breaks while others are as flat as a pancake. Most are interspersed with “kingfish highways” or roll-offs where the sand meets the rock in a defined edge. Slow-trolling big live baits like mullet, ladyfish, mackerel, trout and shad through these areas can be deadly. Anchoring on an edge and chumming can also be productive.
Historical hot (and sure to be crowded) spots include the Blind Pass Drop, Redington, Indian Rocks, Sand Key and Mandalay hard bottoms. Plenty of big kingfish are caught in these areas but the truth is, you are liable to catch a giant kingfish anywhere along the coast — from 50 yards to two miles from the beach. Find a strong presence of bait and clean water (look for that east wind) and a big fish bite isn’t far away.

More and more anglers are figuring out that finding a solitary piece of bottom and fishing it hard can be much more productive than simply following the pack to last week’s dilly hole. The relatively untouched grounds north of Anclote Key have been especially productive in recent tournaments.

Fishing Hard Bottom/Bait Stacks
Sometimes you’ll find them in the middle of nowhere. Sometimes they are associated with a wreck, artificial reef or giant natural ledge. Regardless, there will be a time when you enter a zone where as far as you can see are schools of bait on the surface. Perhaps they are Spanish sardines or Threadfin herring. Regardless, if they appear nervous or are visibly being 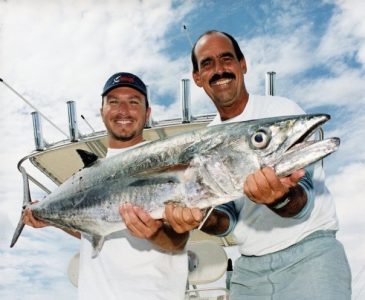 worked, check it out. Jumping from bait pod to bait pod until you find the magical knot holding big kingfish has produced many money fish.

Wrecks
There’s something about a wreck that can attract and hold a large number of big kingfish. Maybe it’s the smorgasbord of forage available (from sardines to snapper) or the simple security of high relief. In any case, the Blackthorn/Sheridan, Tug & Barge, 10 Fathom, Betty Rose, Clearwater Wreck, the Gunsmoke, the Shrimp Barge and the Mexican Pride are all well-known wrecks that have all produced big kings in the past. Slow-trolling over the structure as well as working circles away from the numbers can be deadly. Anchoring up-tide and employing a chum slick can be productive but can bring you un-wanted attention as well. The frustration of wreck fishing ranges from dealing with amberjack that eat all your big runners to barracuda that eat all your big kingfish to divers and weekenders who could care less that you’re fishing for $100,000. On the other hand, I’ve seen too many money fish taken off of wrecks to overlook their potential. Keep in mind that when the wind and waves stir things up for a few days, the bait often flocks to the wrecks and artificial reefs.

Artificial Reefs
Fishing a wreck and an artificial reef are about the same. The only difference is that most artificial reefs are scattered over a fairly large area. Knowing where each and every piece of structure is on a given reef can put you in front of kingfish that haven’t been worked by the pack. Spots like the Rube Allyn, the Indian Shores, the Tarpon Springs and all of the M reefs off Sarasota are unique but can be fished in similar styles. Map out the structure and work the water column hard with whatever bait is holding in the area.

The Florida Middle Grounds*
The new (old) Promised Land. Here’s a kingfish hole that has it all — giant natural peaks, plenty of old, hulking wrecks and a history of giant kingfish. Commercial rod and reelers and spear fishermen have been bringing home 40 to 60 pound “grounds kings” for many years. The prolific structure in the area is an obvious favorite hangout of the rogue smoker and hitting the right peak at the right time can pay off big. It’s at least a 68 mile run to the south end of the grounds and as much as 80 or 90 miles to some of the more productive areas. Pick your days for this trip or you’ll be miserable. Make the run with a group of boats to be safe. The biggest blue runners and small bonitos are top big kingfish baits but you may have a hard time keeping the amberjack off your hooks. The biggest king I’ve caught in the grounds (46 pounds) ate a live Key West grunt on a flatline.

Shrimp Boats
A lot of people do it but not many talk about the big kings they catch while blackfin tuna fishing behind an anchored-up shrimper. There’s just something about hundreds of pounds of dead fish being slopped out into a chum slick as the sun rises over the deep blue Gulf that appeals to a big kingfish. Not to mention to the blackfin tuna, cobia, sharks, barracuda, bonito and big jack crevalle. Find a concentration of culling shrimp boats and somewhere nearby is a 30 to 40 pound kingfish. A radar and the ability to run and gun at high speeds is necessary to effectively fish shrimpers as most ply random waters some 30 to 50 miles offshore. Any and all found on the hook are worth a slow-troll lap or two.

Boca Grande Pass/Channel
Deep water, steep ledges and strong current all combine to suck big kings in and out of the mouth of Charlotte Harbor. There’s enough hard bottom and structure around the pass and 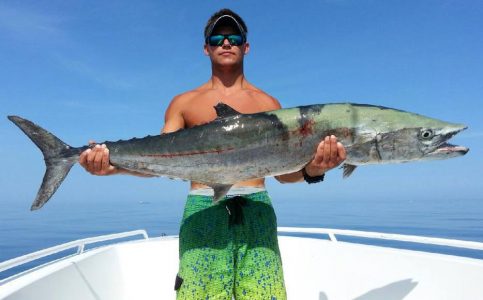 channel to hold large numbers of fish. When there’s big kings in the Pass it’s hard not to catch a 30-pounder.

Formulating Your Own Big Fish Philosophy
There’s no doubt you could follow this story’s lead to catch a smoker king. It is an accurate historical marker regarding big fish of year’s past and a good place to start. But as with any sport, it is the innovators and teams not afraid to try something different that consistently do well on the kingfish circuit. It is the teams that aren’t afraid to fish outside the pack that put up big fish on a regular basis. The truth is, we are blessed with so much productive kingfish bottom between Boca Grande and Homosassa that one would be foolish to limit their monster hunting to these traditional hot spots.

The fact is, you’ll see a lot of high 20 to mid-30 range fish caught out of packs and popular spots but more often than not, the winning fish, the 38 to 50-pound monsters, are solitary loners pulled from low-pressure areas. This is especially true in shallow hard bottom areas where an over-abundance of boats can shut a big fish bite down much easier and faster than in deeper water. Hunting down your own spot where conditions are ideal is much more likely to produce a winner than trying to luck a winner out of the pack.
At the same time, some of the best and most consistent big fish catchers I know fish the same areas religiously. Their philosophy is based more on perfecting a technique specific to a certain area or type of fishing and knowing when exactly to fish where. As a fulltime fishing guide, this is more in tune with my tournament plans. If you catch big kingfish on a regular basis, you know when and where they will bite. The gamble is that you’re going to catch the fish of a lifetime every weekend.
Which is a whole lot easier when you know the right places to look for her.

*Editors Note: The Florida Middle Grounds is every bit as great a Kingfish spot as Jon describes. It is also, outside of the 30 mile offshore boundary for both Old Salt – King of the Beach Kingfish tournaments. So, if you are fishing the King, you are not fishing the Middle Grounds….. #justsayin’

Read this touching tribute on Jon, written at the time of his passing, by Terry Tomalin for the Tampa Bay Times in 2016.

3 Responses to Nine Places to Catch a Smoker King