Good Day, Captain. The 25th Anniversary Old Salt Spring King of the Beach Kingfish Tournament is in the books…. and you were there! 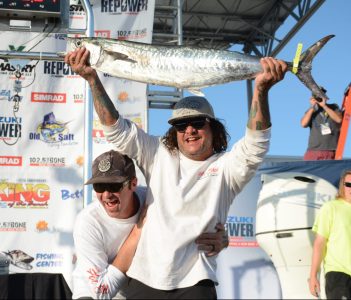 traveled from across Florida, the Southeast U.S., west to Texas, north to New England and even from as far away as Germany to compete in and experience the KING.

The day of the tournament the wind, which had been northerly for several days, and the seas conspired to knock the teams around pretty good while they were chasing Kings. It was a rocky day on the water. Add to that, dredging operations in Johns Pass presented an oddly lit obstacle course for anglers transiting the channel in the early morning hours.

When it was all said and done, and with over 200 fish weighed, Team War Chant led by Captain Chad Knoerr took first in the Overall and, because they entered both TWT’s, walked with $103,877.

And… while we paid out loads of money and prizes to the adults in 8 different divisions and categories it was, as always, the youth anglers who stole the show. 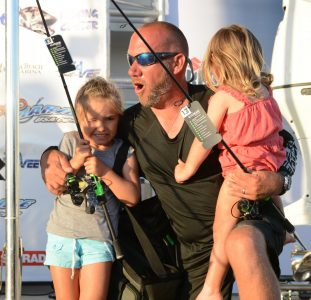 The kids put on a real show. Every youngster that weighed a fish in the tournament was presented a new rod and reel combo plus a sweet tackle bag to boot.

Old Salt puts on tournaments for anglers. The tournaments also serve as a fundraising vehicle for the many charities we partner with and the family & youth programs Old Salt delivers throughout the year. You saw us present over $25,000 to charity partners at the Captains meeting on Thursday night. Thanks to your team, Old Salt will be able to, once again, to continue funding these worthy enterprises. Thank you.

Interesting factoid: Four of the top five prize winning teams (Top 3 in Overall + winners in Spanish and Single engine) had never placed in a King of the Beach tournament previously. Winnings across the board were garnered equally by both local and traveling anglers. The love was truly spread.

Thank you, again for fishing the KING. The 25th Anniversary 2018 Fall King of the Beach Kingfish Tournament is scheduled for November 8, 9 & 10, 2018. We look forward to seeing you there and wish you tight lines in the interim.