The 2018 Old Salt Fall King of the Beach Kingfish Tournament is in the books. 487 fishing teams braved better than stiff winds, better than choppy seas and Red Tide to chase their goal of winning the KING. In that 487 teams were anglers from across Florida, the S.E. united States and even the areas recently devastated by hurricanes Florence and Michael. An intrepid bunch to be certain. None more intrepid, however, than Team Reelentless who went home with the crown… and a healthy payday. For those readers with an interest and a little spare time… click the link below the watch the livestream recording from the tournament.

WATCH THE LIVESTREAM RECORDING OF THE 2018 FALL KING

We were awash in Kings and Spanish, weighing a record number of fish at this King. The most we have ever weighed including Spring 2018 when we had 200 more teams chasing the same goal! Hats off to every angler who stood the test on the water and then stood on line for what seemed like forever to get their fish weighed.

In the end some 63 teams scored a place on the stage at the awards ceremony. These anglers brought in the heaviest fish in their respective divisions and all walked with something, to a whole lot of something, in their pockets for the effort. The six divisions in the tournament were Overall Kingfish, Single Engine, Spanish Mackerel, Ladies, Traveling Angler and Youth Angler plus special TWT, Closest to 25 lbs. and 25th Place Overall prizes. 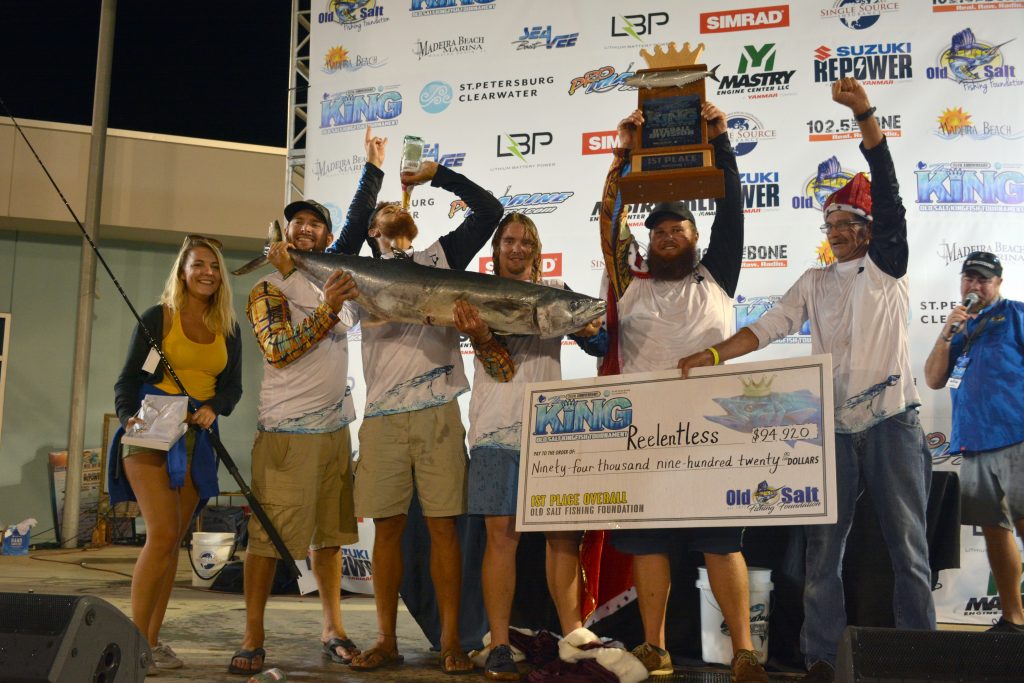 Team Reelentless weighed early and big. With a 46.82lb. smoker on the board they held off all comers for the better part of 5 hours. To say that the wait was excruciating would be a gross understatement. Team Reelentless also placed 2nd in the 2018 Spring King with a king mackerel that weighed a scant .64lb. less that this years catch. The difference in payout from tournament to tournament was, however, not scant at all.

While an abundance of the attention at every KING is focused on the competitive teams and the weigh-in and the awards this bi-annual tournament always has more to offer than just the HUGE payouts and revelry of the weigh-in. This Fall Old salt held a Kids Fishing Slam, during the tournament, on Friday the 9th of November. Over 400 youth anglers from our local area came out with their families and fished in the slam. Rods and Reels were provided by 13 Fishing, bait by Aylesworth Fish & Bait, guidance and support by Old Salt volunteers and the kids brought enough fun for all of us.

Old Salt also participated in the Veterans Boat Parade, awarded 4 college scholarship prizes to deserving local high school students and held a 3 day waterfront community festival at the same time. It was a fun filled, busy tournament. All of this was made possible by the generosity of Old Salt Fishing Foundation sponsors and supporters.

All in all, it’s good to be the KING and it’s good to come out to the KING. We enjoyed ourselves and think most everyone else did as well.

Until the next KING (psst…. that coming up next April) stay safe and tight lines.